Phew. A lot of effort went in, but it seems to be worth it. Server side script does the authentication, login, region subscription, physics, and general world simulation and network updates. Plus a bunch of nonhuman players. It works! Started really slow at 1 tick per second just to be able to keep track of all logs and networking. As a greatest feature ever, dead reckoning was implemented and things look so smooth! Both for translations and rotations. Already at 2Hz you just can’t really tell anymore what refresh rate is. That should leave a lot of bandwidth and CPU time for a lot of players! About packet sizes, I started at 22, and ended up with 28 bytes per visible player, which seems satisfyingly little to me. As much as I would love to start benchmarking, optimizing and yakking about numbers as soon as possible, I will probably leave that for last.  Plenty of things to do next: collisions, controls, player cam. Sounds. I wonder what iPad version will be out by the time all this actually gets done….Either way, I’m off to earned summer break! I might do some work, but again I might not. I will probably just do some envisioning of possible features that would make this game epic! 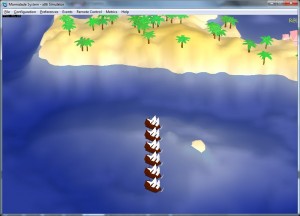