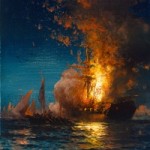 Upon receiving enough hits from cannon or land, you die. Conceptually not so simple in MMO, IMHO. So dead player should be punished, but not to much in order to avoid anger and blasphemy and other negative emotions. But not too little either, to avoid indifference. Same goes for killing rewards which have to be motivating enough, but still leave a dead player in good mood. Not an easy task, as every online game seems to be dealing with it differently. In order to avoid hyperinflation, literally, reward and punishment should be about the same. Don’t have magic number yet, but I recon about 25% of everything onboard should do it. But you magically keep your sinken ship, yay! When dead/sunk, you will shortly respawn in last docked city with penalties applied. Docking taxes included and game saved. :)